Today being Black Friday, a day many people are out of the office and therefore not reading PopCult at work, I have decided that this is a good day to revisit some gift suggestions that I’ve made in previous years. These are all for stuff that is still available, and one or two of the items have been updated, so they’re sort of new. It’s rerun day in The 2021 PopCult Gift Guide. 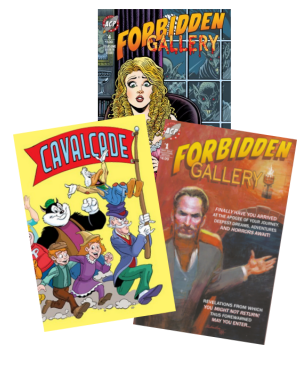 First recommended in the 2016 PopCult Gift Guide we have one of my favorite independent comics publishers, ACP Comics, who have put out the horror anthology, Forbidden Gallery, and earlier this year a great Funny Animal comic, Cavalcade.

Existing outside of the world of Diamond Comics Distributors, Forbidden Gallery, published by ACP Comics, is the brainchild of Editor/Publisher, William Mull. Mull gathers together a diverse collection of veteran creators and newcomers to produce very entertaining old-school comics.

When I heard that ACP was working on a Funny Animal anthology featuring public domain characters like Tubby the Scout, Bruno Bear, Pudgy Pig, Timmy the Timid Ghost, Hucky Duck, alongside new anthropomorfic creations, I was in. Much of ACP’s crew from Forbidden Gallery also worked on Cavalcade.It’s a great mix of veteran creators and newcomers. This is a fun throwback to the days when every comic book didn’t have to be a test balloon for a movie or TV series.

A Wealth of Pigeons: A Cartoon Collection 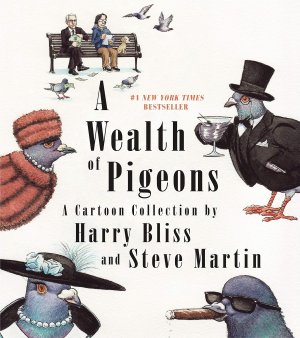 In a recent New York Times profile, Steve Martin was described as ” an aspiring cartoonist with no artistic ability. ” Having spent many nights between 2 AM and 4 AM jotting down ideas for cartoons, Martin asked Harry Bliss, a famed New Yorker cartoonist who probably owns a mansion and a yacht if he would be interested in bringing his ideas to paper.

According to the Times, “Bliss was interested. Over the next six months, they created around 200 cartoons, many of which appear in their new collection, A Wealth of Pigeons.”

This would be a great gift for the die-hard Steve Martin fan who started buying his books over forty years ago with Cruel Shoes. Bunches of other people will like it, too.

You can order A Wealth of Pigeons: A Cartoon Collection from any bookseller by using the ISBN code, or you can save find it now for less than half the list price at Amazon. 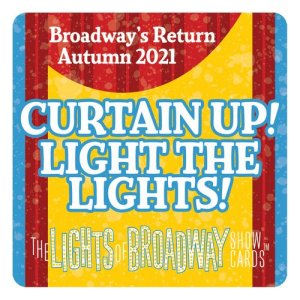 I’ve mentioned these cool Broadway-themed trading cards in previous PopCult Gift Guides, and I’ve even written about them for Non-Sport Update Magazine, but they’re such cool, unique gifts, and they are about to unleash new editions, that I’m telling you about them again.

The Lights of Broadway Show Cards feature the artwork of Broadway’s reigning caricaturist, Squiggs, and present the stars, theaters and shows of The Great White Way in trading card form. This is the absolutely perfect gift for the theatre fanatic on your holiday shopping list.

The Lights of Broadway Show Cards celebrate Broadway theatre. The stories and the storytellers, the art and the artisans, those who make it all possible and the community embracing it. Shows, actors, directors, writers, designers, and all else in the spotlight or behind the scenes who keep the theatrical world spinning.

Over at The Lights of Broadway website, you’ll find special deals where you can pre-order packs of their new 2021 Edition, with dozens of new faces showing up in the series for the first time.  While this is a pre-order, you can expect these to begin shipping within the next week. You’ll also find deals on binders and starter kits (which include an illustrated binder and several packs of cards), plus lots of new special edition cards that have helped bridge the gap during Broadway’s dark year. Also new this year is the Lights of Broadway Playing Card Deck, which will be a pre-order for a few more days at a great price.

Single packs are only five dollars, and you can be a little more generious and get your giftee multiple packs. They’ll fit in a stocking, trust me. Some cards are more rare than others and there are many super rarities to be found. Each pack contains five cards. You can’t find a better stocking-stuffer-priced gift for the theatre buff on your holiday shopping list.

Our last two gift suggestions today are for the Beatles fan on your shopping list. Because of the interest stirred up by the new Get Back documentary on Disney+, I think these might just help flesh things out for the Beatle fan craving more. 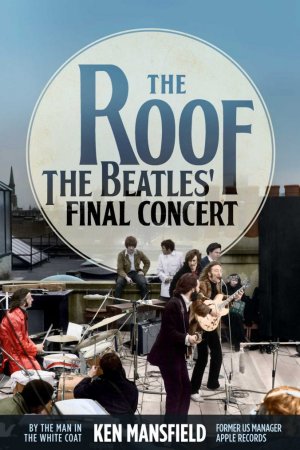 When I first suggested this book three years ago, it had just been published in time to mark the fiftieth anniversary of The Beatles’ famed rooftop concert at Apple. This book, penned by the former manager of Apple Records’ US division, is a great gift idea for the die-hard Bealtemaniac on your holiday shopping list who didn’t get enough information on the rooftop show from Get Back, or the accompanying book.

The Roof: The Beatles’ Final Concert, was written by Ken Mansfield, billed on the cover as “The Man In The White Coat.” It’s all about the January 30, 1969 concert that closed the movie, Let It Be, Mansfield gives us new details on how this strange and epic event came to happen.

In this book, Apple Records former US manager Ken Mansfield takes a touching and comprehensive look back on one of Rock’n’Roll’s most significant events, while bringing an insider’s perspective to the days leading up to those 42 fascinating minutes of the Beatles monumental Rooftop Concert.

There are moments in time that cause us to stop and take notice of where we were and what we were doing when they happen in order to commit the experience to memory—how it made us feel, who was there with us, why it felt important. January 30, 1969 was one of those moments. As the US manager of Apple, Ken Mansfield was on the scene in the days, weeks, and months leading up to this monumental event. He shares his insights into the factors that brought them up onto that roof and why one of the greatest bands of all time left it all on that stage. Join Ken as he reflects on the relationships he built with the Fab Four and the Apple corps and what each player meant to this symphony of music history. 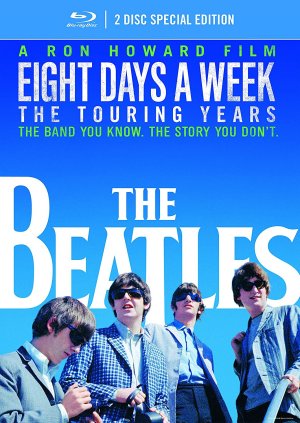 Where Get Back shows The Beatles struggling to mount their first live concert in almost three years at the end of their career, The Beatles: Eight Days A Week – The Touring Years is based on the first part of The Beatles’ career (1962-1966) – the period in which they toured and captured the world’s acclaim.

Ron Howard’s film explores how John Lennon, Paul McCartney, George Harrison and Ringo Starr came together to become this extraordinary phenomenon, “The Beatles.”  It explores their inner workings – how they made decisions, created their music and built their collective career together – all the while, exploring The Beatles’ extraordinary and unique musical gifts and their remarkable, complementary personalities. The film focus’s on the time period from the early Beatles’ journey in the days of The Cavern Club in Liverpool to their last concert at Candlestick Park in San Francisco in 1966.

It dovetails nicely with Get Back, since it shows the various pressures and stress that led the band to quit touring, which in turn led to their most creative period in the studio.

Featuring rare and exclusive footage, the film is produced with the full cooperation of Paul McCartney, Ringo Starr, Yoko Ono Lennon and Olivia Harrison.  The Beatles: Eight Days A Week – The Touring Years consists of two discs, Disc One has a running time of 106 mins, while Disc Two runs 100 mins. DISC TWO contains over 100 minutes of special features covering all aspects of The Beatles early career right up to 1966 and it includes five rarely seen full length performances.

This two disc set is packaged in a digipak in a slipcase which also holds a 64 page booklet with an introduction from director Ron Howard, an essay by music journalist and author Jon Savage and rare photos from The Beatles’ private archive.  You can still find it at Amazon, or almost anywhere that videos are sold.