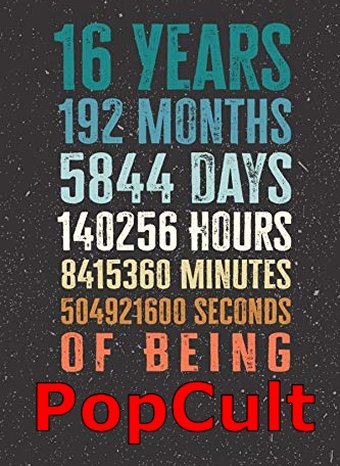 The RFC Flashback is begging off a little this week because today is the 16th anniversary of PopCult. It’s our first time marking this day since we slid out from under the umbrella of The Charleston Gazette-Mail, but we are still plugging away.

To be honest, since I went all-out for our tenth anniversary, and made a decently big deal about last year’s 15th anniversary, this year I’m just doing this one post. Part of that is because the anniversary of this blog falls two days after my wedding anniversary and we’re not quite back from our celebration at an undisclosed location.

I mean, I could repost some of my favorite posts from the last 16 years, but you can find the archives in two different places on this page. It’s still a trip to think that I’ve been doing this sixteen years, posting daily for the last eight years.

Instead of making a huge deal about it, and since I’m bumping The RFC Flashback for this….I’m going to post a video treat, just for the hell of it.

Here is the second video episode of Radio Free Charleston. This is the episode that they won’t let me post on YouTube because, hilariously enough, I included a gag that contained footage from a 100% bootleg, unlicensed musical based on Batman. It’s hilarious because the folks who produced this blatant knockoff movie that included Wonder Woman, Tarzan, The Joker, and in the big production number, a little person dressed as Spider-man…filed a copyright claim against me with YouTube. The music in their film was also ripped off of old-time rock -n- roll, but they were offended by me using two minutes of their footage.

Luckily, Vimeo doesn’t give a crap about that sort of thing, so enjoy this, our second video episode of RFC, with music from Stephen Beckner and The Sleeping Dons (Sean Richardson, Jay Lukens and Deren Sodaro). Stick around for the gag at the end. I thought it was funny.  More importantly, it’s pop-culturally weird enough to perfectly embody the spirit of this blog.