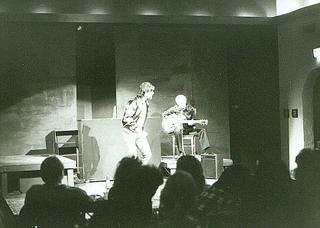 While I’m in a reflective mood, I thought I’d share an image with you all.

One night early in 1990, if I recall correctly, I knocked off work early, and rounded up my buddy John “Sham Voodoo” Estep, because he was going to host a Thursday night acoustic jam at the Playhouse. The Tuesday jam had been a huge success, but we wanted to try something a bit quieter.

The problem was that nobody told us that the Playhouse had already been booked that night.

Morgantown film maker Jacob Young and Michael Lipton had arranged for a performance by the then-unknown “dancin’ outlaw” Jesco White.

It was quite a shock. After getting over the disappointment from the cancelled jam session, Sham and I found ourselves mesmerized by the unique dance styling of the Boone county legend. I had my camera (loaded with pretentious artsy-fartsy black and white film) and snapped the photo you see above.

At the time, I chalked it up as just another night of Charleston Playhouse bizzaromania. I also remember that the stage at the Playhouse was never the same after Jesco had at it with those cast-iron tap shoes.

It was surreal, and one of those things in life that seems like a dream. It was a year or more before the Dancin’ Outlaw documentary was finished, and by that time, we’d all forgotten about it. In fact, this photo sat in my archives until last month, when I found it in while moving stuff around. Then I remembered, I was there the night they filmed Jesco for the documentary.

Another surreal moment was a few years later, when Jesco was the Grand Marshall of the annual Commode Bowl Parade in Dunbar. The parade route goes right by my house, and I took a moment from cooking a Thanksgiving turkey to look up and see Jesco, in full Elvis regalia, riding by my living room window on a fire truck.

I didn’t get any pictures that time.