Rejoice, fellow geeks! For I have solved a #firstworldproblem.

Bear with me here while I tell you about the complexity of the issue.

You see, I lost control of the master television.

That is because we got a dog.

And the dog does not get along with the cat.

And the cat lives in the master bedroom.

That is where the big TV is. And it is connected to the TiVo. Which is where all my programs stack up, unwatched for lengthy periods of time.

Because I stay downstairs during evening relaxing time.

So I got this thing that seemed like a good solution. It’s called a TiVo Stream, and it will transfer programs from the DVR to a portable device such as an iPad.

Except the TiVo stream needs to be plugged into the TiVo — which, I’ll remind you, is upstairs in the master bedroom, along with the cat — but it also needs access to the Internet router, which is downstairs with me and the dog.

That meant I needed yet another additional thing I’d never heard of called a MoCA, which stands for “multimedia over coax alliance.”

Not as zippy as “League of Nations,” is it?

Sounds like something you’d order at Starbucks. “Can I get a MoCA? Along with seventeen episodes of my favorite shows?”

Well, a MoCA will help you send your Internet through the coaxial cables in the walls of your home.

In my case, it means a way to make sure the programs I want to magically zip to myself in the other room don’t aggravate me by buffering all the time. Smoooooooth.

So I went to Best Buy to ask for a MoCA adapter or two, and the guys on the Geek Squad (at least the ones I asked) did not know what I meant. Boy, did I feel marvelously geeky!

I wound up ordering my Internet-enhancing miracle gadgets over the Internet, which felt very circular.

And now I can watch television over my portable device while also hanging out with man’s best friend.

I solved a problem you never knew needed to be solved.

Watching the Oscars and need a second screen? Well, look no farther!

Critics, reporters and photographers across Digital First Media will provide a real-time second screen experience to the 2013 Academy Awards, with curated content from celebrities and analysis.

The 85th annual Academy Awards take place on Sunday, Feb. 24. Who will take home the top awards this year? We break down the nominees.

Any man-on-the-street interview would produce that same description of reality television: It’s a mostly brainless, vain endeavor — but enjoyable. They would cite drunken 20-somethings who stumble their way into each other’s beds, eating tours of America that only seem to feature fried meat and tearful singles looking for real love, 12 suitors at a time.

The truth is that reality TV can be both important and enlightening. But that’s not what you get on a nightly basis. Greatness is fleeting in this genre, but every so often, we come across treasures like SyFy’s “Face Off.” You may recall this program featuring Charleston’s own RJ Haddy, whose immense talent did not go unnoticed as a finalist last season.

Demon creations from this season line up for a frightening reveal.

But for the uninitiated, it’s a show about makeup artists competing to create the most impressive and original prosthetics and costuming the world has ever seen. Each episode, they’re given a different assignment — usually some creature slanted in the sci-fi and horror genres. They tackle the challenges alone or in pairs, depending on the week, and are given basically three days to produce a Hollywood-ready creation.

But here’s the kicker: They have to actually be good. This isn’t a show about the judges with big personalities or in-fighting between the competitors. It’s not about who’s the prettiest or the drunkest or the meanest or richest or the most ruthless or the person who’s “not here to make friends.” In fact, most of the cast is quite fond of one another; they simply let their pieces do the battling.

The show’s success is rooted in the producers finding capable, persistent professionals who simply aspire to make great things. This week, lovable weirdo and potential frontrunner Eric F. said that he “worked so hard” to win this episode’s prize. It was a highlight of the season because any person who watches the show can see that he’s absolutely right. This guy has consistently provided some of the wildest and most ambitious creatures this season, and he finally nabbed the top spot after weeks of being a celebrated contender. The truth is in the pudding … or the putty … or whatever they’re using. 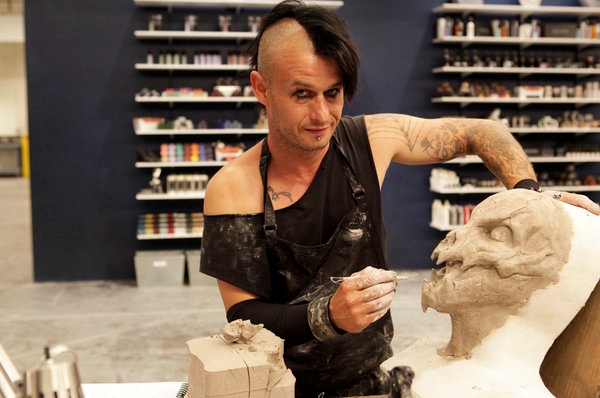 Eric F. works on a creature in an early episode of this season.

Many shows would sprinkle backstory or mini-games throughout the overarching challenge that drives each episode. But part of the reason the show works is that you’re in the thick with these people for all three workdays, experiencing their frustration when plans bust, excitement when new ideas evolve and the nervous thrill that comes with possibly being in over their heads. It’s a competition show about the competition.

There’s a certain justice in “Face Off” missing from several of its peers: If you’re great at your job, you will see progress and garner recognition. It’s the reason contestant Anthony dominated for a few consecutive weeks. He’s just that good, and it’s up to his rivals to step up to prove their worth.

The addictiveness of the show comes from hard work, not people we “love to hate” or explosive confrontations. This is due to the fact that our protagonists are not a blank slate of talent — people off the street who were just quirky enough to be given a shot at a new trade. It’s not about everymen racing to the finish on large, floating obstacle courses, or about celebrities who must partner with seasoned professionals and get the right amount of votes to progress.

The judges, veterans Glenn Hetrick, Ve Neill and Neville Page, are the ones giving the boot, and no one is to blame but the creators for their failures. When the contestants are partnered with each other, the program even makes it a priority to point out who is responsible for what aspects of a creature. When’s the last time you saw that kind of justice on reality television?

The fourth’s season’s judges were joined by actor John Rhys-Davies for one episode.

The greatness of “Face Off” is certainly helped by an interesting and fun premise, but the underlying success of the show lies in its dedication to displaying what people can achieve when they have a real passion for what they’re doing. You can’t wait to see what these people think up — and when they fail, you’re just as disappointed.

It’s as real as reality television can get. And though it may not have the name-recognition and funding of other programs, you can bet it’s far more memorable.

Critics, reporters and photographers across Digital First Media will provide a real-time second screen experience to the 2013 Grammys, with curated content from celebrities and analysis. Follow along!