Today in The 2022 PopCult Gift Guide we are going to offer up a selection of cool graphic tees for the person on your shopping list who likes to wear cool graphic tees. Except for one suggestion, these are links that will take you to cool stores with many different T-Shirt designs. It’ll give you more latitude in choosing your gift.  Some of the designs you’ll see below are available on items other than shirts (but not the first two) and they all come in a variety of sizes,  while some stores also offer some different shirt color options, as well.

I’m going to try to give you extra examples of what the shirts look like, but follow the links in the subject header to see for yourself. I only gots so much space to work with here.

All five designs are still available, but I don’t know for how long.

Svengoolie started out as “Son of Svengoolie,” (so named by the original Sven, Jerry G. Bishop) back in 1979. After becoming Svengoolie proper and also becoming a Chicago instittion, Rich Koz would go on to great fame almost thirty years after this when his show finally went national on METV.

Earlier this year METV celebrated Svengoolie’s long career by commissioning these five shirts, and also with a television special that aired throughout October.

Chances are you know a fan of Svengoolie, and chances are, they’d love to have one, or all, of these shirts. 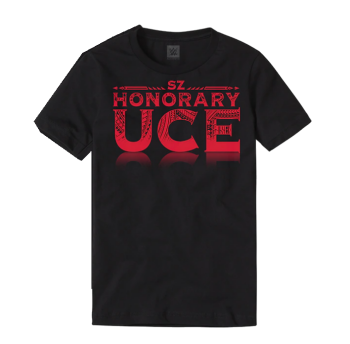 This pick is for a single design, but if you follow the link up there you can navigate to all sorts of other WWE and NXT T-shirts.

The single shirt I’ve picked is for Sami Zayn, who in my opinion has been the top professional wrestler of the year. From his show-stealing match with Johnny Knoxville at Wrestlemania to his months-long storyline as an honorary member of the most powerful faction in wrestling, The Bloodline, Zayn has shown an uncanny ability as an actor as well as a wrestler.

Zayn was always amazing in the ring, and he always found ways to connect with the crowd, as a face or as a heel, but this year he’s risen to new heights in storylines that have way more depth than your usual wrestling angle.

His chemistry with Roman Reigns and The Usos is so strong that, in one of the most memorable wrestling moments in years, he managed to get Reigns and Jey Uso to break character and crack up during a promo. He was like Tim Conway to their Harvey Korman.

So, with that said, our final T-shirt pick today is the SZ Honorary Uce shirt, commemorating his being welcomed into the legendary Samoan A’noi family. Not too bad for a guy who’s just your average Red-headed Canadian Muslim.

That is The 2022 PopCult Gift Guide for today. Tomorrow we near the end with a day devoted to EC Comics.