Seventeen days into our twenty-day journey of The 2022 PopCult Gift Guide, we find ourselves once more pondering the gift-worthiness of a small stack of wonderful books.

Robert’s work has appeared on album covers, in publications such as THE THING: ARTBOOK, VISIONS FROM THE UPSIDE DOWN: STRANGER THINGS ARTBOOK, Tiki Magazine and Pinstriping & Kustom Graphics Magazine, and has shown in galleries including Disneyland’s Wonderground, Harold Golen, M Modern, Creature Features, and Bear & Bird among others.

This is a cool way to enjoy Robert’s twisted creations in a more easily-accessed format. As a bonus, the cover is a bit of a tribute to the 1970s’ Batman Family comic book.

Recommended for the fan of macabre silliness, lowbrow art and monster culture on your shopping list. For other cool items from Robert, check out his webstore. You’ll find his artwork on shirts, wall art, trading cards, in books and even on shoes. 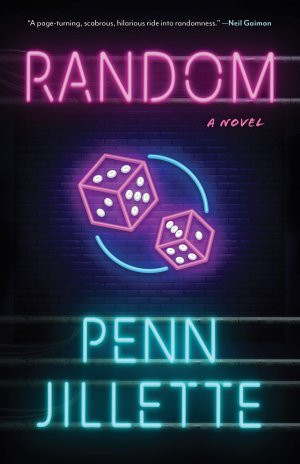 This is a novel by Penn Jillette, of Penn & Teller fame, and I have to admit, I haven’t read it, so here’s what the publisher says…

From Penn Jillette of the legendary magic duo Penn & Teller: a rollicking crime caper that will bend your mind like a spoon.

“Penn Jillette is an atheist, triple-goddamned lunatic, and his book is a glorious Las Vegas lunatic paean to chance and adventure—a page-turning, scabrous, hilarious ride into randomness.”
—Neil Gaiman

“Jillette’s latest novel, Random, is about a young man who inherits his father’s crushing debt to a loan shark and turns to dice—and other dangerous measures—to dig himself out. That the dice bring him luck sends him a new philosophy of leaving decisions both big and small up to chance.”
—New York Times

Two weeks before his twenty-first birthday, Las Vegas native Bobby Ingersoll finds out he’s inherited a crushing gambling debt from his scumbag father. The debt is owed to an even scummier bag named Fraser Ruphart who oversees his bottom-rung criminal empire from the classy-adjacent Trump International Hotel. Bobby’s prospects of paying off the note, which comes due the day he turns twenty-one, are about as dim as the sign on the hotel’s facade.

The two weeks pass in the blink of a (snake) eye, but before Bobby’s luck runs out, he stumbles upon enough cash to pay off Ruphart and change his family’s fortune. More importantly, he finds himself with a new, for lack of a better word, faith.

Bobby does not consign his big break to a “higher power”—what Penn Jillette hero ever could? Instead, he devises and devotes himself to Random, a philosophy where his life choices are based entirely on the roll of his “lucky” dice. What follows is a rollicking exploration into not so much what defines us as what divines us when we give over every decision—from what to eat to whom to marry to how or when to die—to the random fall of two numbered cubes.

Random combines the intellectual curiosity of Richard Dawkins with the humor and grit of an Elmore Leonard antihero. Jillette’s up-on-his-luck Ingersoll is the character we need to help us navigate the chaos of the post-truth era.

Well, unless his roll runs cold.

Sounds entertaining and intriguing, and is likely a great gift idea for any fan of Penn & Teller.

Tomorrow The 2022 PopCult Gift Guide has you covered with T-shirts.