Today being Black Friday, a day many people are out of the office and therefore not reading PopCult at work, I have decided that this is a good day to revisit some gift suggestions that I’ve made in previous years. These are all for stuff that is still available, and one or two of the items have been updated, so they’re sort of new. It’s rerun day in The 2022 PopCult Gift Guide. And yes, I did this on Black Friday last year, so even the idea is recylced.

This is a book that was due out in 2020 but was delayed by the pandemic until the spring of 2021. I reviewed it in March, and here’s why you should consider giving this as a gift to the person on your shopping list who needs a little prodding to get into the holiday spirit.

Mark Voger has written a series of wonderful books of pop culture nostalgia for TwoMorrows and Holly Jolly is no different. It’s basically a collection of short, entertaining essays, lavishly illustrated, that celebrate Christmas as a pop culture phenomenon. Sections of the book are dedicated to the history of the holiday, the toys of Christmas, the books, movies, decorations, television and music of Christmas and even holiday memories from celebrities.

Holly Jolly is a brisk, enjoyable survey of fond recollections that doesn’t have to be devoured in one sitting. This is going to punch the nostalgia buttons of readers of a certain age (like yours truly) more than others, but the experiences are universal enough that anyone who grew up enjoying Christmas can identify.

Voger touches on everything from Captain Action to Gumby to “I Love Lucy,” to classic animated Christmas specials to hit holiday songs to beloved movies.

Holly Jolly: Celebrating Christmas Past in Pop Culture is a nice blast of Christmas spirit, and it’s really too much fun to hold off and read only during the holiday season. You might be able to order it from any bookseller using the ISBN code, but Amazon has it in stock now. The publisher is sold out of print editions.

I’ve told you about these  cool toy horses several times in PopCult, and you can still get your hands on some of these high-quality reproductions of the Marx Thunderbolt Horse, in new colors, with, or without, the cool riding gear. In fact, they’re not exactly repros. These cool toy horses are made from the original Marx molds!

These are terrific 1/6 scale horses, perfect for any 12″ action figure (or fashion doll). You can order them HERE, and be sure to check out the rest of his site for other cool Western accesories for your 1/6 scale cowboys.

These would also make great gifts for the horse lover on your shopping list who wants a little equestrian reminder of their favorite animal to keep on their mantlepiece or display shelf. The horses are available in gray or dark brown, with custom, hand-painted details. The saddle and tack is available in white, red and brown.

To make these, Stevo uses the actual 50-plus-year-old molds for the original Marx Thunderbolt horse, the faithful steed of Johnny West. As folks of a certain age are well aware, this horse is compatible with GI Joe, Captain Action, Barbie and any 12″ action figure with the proper leg articulation. These are terrific 1/6 scale horses, perfect for any 12″ action figure (or fashion doll). You can order them HERE, and be sure to check out the rest of his site for other cool Western accesories for your 1/6 scale cowboys. 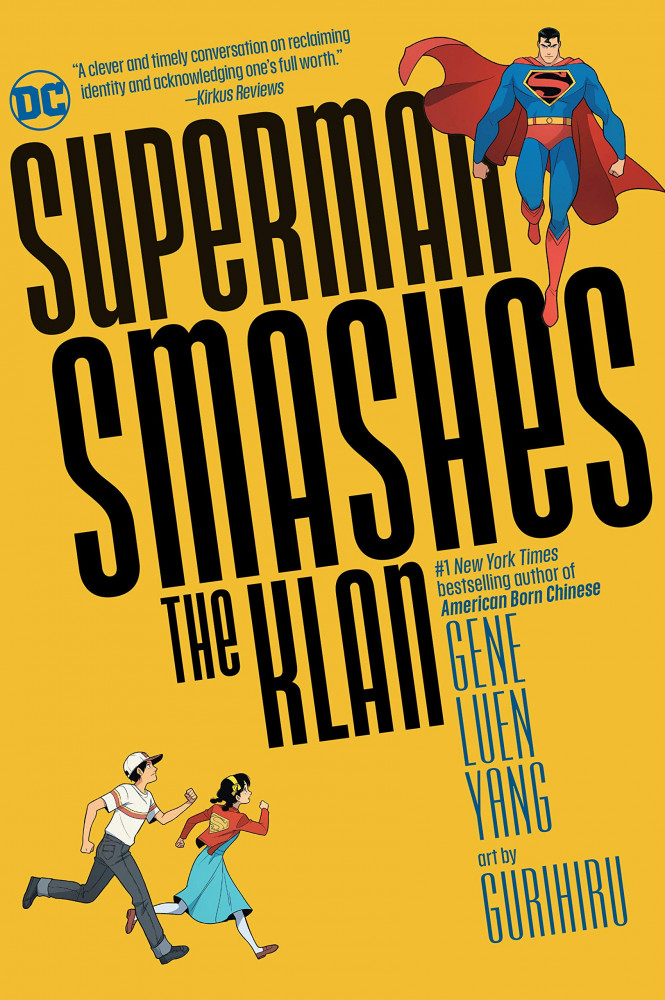 First off, Superman Smashes The Klan is a terrific Superman adventure. It presents the iconic, original superhero at his best, fighting bigotry and injustice and other anti-American ideals in an engrossing and entertaining story. Secondly, the story frames this adventure in a nuanced and intricate tale that explores the immigrant experience in post-World War II America. Lastly, it makes it clear that The Klan are the bad guys, something that cannot be repeated often enough or loud enough these days when White Supremecists seemingly have allies in very high places.

Written by American Born Chinese author and MacArthur Fellowship recipient Gene Luen Yang, with art by the Japanese art duo known as Gurihiro, Superman Smashes The Klan is a very timely story, executed in a near-perfect style. While totally appropriate for younger readers, the story has enough complexity and characterization to satisfy any adult reader.

Based on a summer 1946 story arc from The Adventures of Superman radio show, this is the story of Superman coming to the aid of a Chinese-American family that has just moved to Metropolis, and finds themselves under attack by The Klan of the Fiery Cross.

That radio story was created in conjunction with the Anti-Defamation League, and is credited with doing serious harm to the KKK’s recruitment efforts. The Klan even tried to organize a boycott of Kellogg’s, the radio show’s sponsor, which failed, proving that boycotts only work when they’re justifed and moral.

Yang keeps the 1946 setting, but updates and expands the story to address additional themes of the immigrant experience, and manages to very effectively tie them to Superman’s Kryptonian origins, which Clark Kent confronts for the first time in this (non-canon) story. He re-centers the story with a focus on the Lee family, and adds a daughter, Roberta (Lin-Shan) who is really the star here.

Charleston’s Glen Brogan is the type of artist that makes his fellow artists want to give up and pack it in. His art is so good that it’s hard to imagine anybody topping it. With a sleek style and a strong appreciation of the coolest elements of pop culture, Glen has made a name for himself with exhibits in New York and Los Angeles and work commissioned by Disney, King Features Syndicate, Marvel Comics and more. His first book was published in conjuction with an exhibit at HGCArt in Los Angeles. This new edition has even more of his amazing art.

You can order the book from HGC Art.  And that’s not the only way you can buy some of Glen’s artwork.

So, as we  have been doing for six or seven years, we are once again going to recommend the art of Charleston’s own Glen Brogan.  At his Albino Raven website you can find links to where you can buy Glen’s artwork on T shirts, prints and more.

Seriously, we’re talking about eye candy of such a high grade that it can mess with your blood sugar.

This is a great way to support a local artist who’s making his name on the international scene and treat your gift recipient to a wonderful work of art. 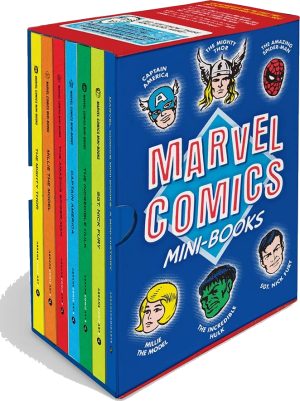 You’ll have to excuse me for being old enough to remember this, but when I was just turning four years old, the idea of finding Marvel Comics in gumball machines was mind-blowingly epic. Thanks to some older fellow comic book fans I got to see some of these treasure years later, but I was not allowed to open them because they were so fragile. These were fifty-page comic books that were smaller than a postage stamp.

Being four when they were published, I literally didn’t have a dime to spare, if I’d ever have been able to find a gumball machine stocked with these in the first place, but for years I wondered what the books were like on the inside. Now I don’t have to wonder any more.

As the blurb goes…

Reprinted for the first time, the world’s smallest comic books—originally printed in 1966 and now enlarged to a more readable size—in a seven-book collectable boxed set

In 1966, Marvel printed what the Guinness Book of World Records certified as the world’s smallest comic books. Smaller than a postage stamp, and sold in gumball machines across the country, these six books told the quirky origin stories of Marvel’s most beloved characters at that time: the Amazing Spider-Man, the Incredible Hulk, the Mighty Thor, Captain America, Sergeant Nick Fury, and Millie the Model.

Marvel Comics Mini-Books reproduces facsimile editions of all six books in one affordable box set—along with a seventh book written by Mark Evanier that details the history and creation of these rare, vintage collectables.

That seventh book is the icing on the cake that makes this package worth more than just a novelty. It includes an essay by Mark Evanier that attempts to identify the creators of these comics (many are clearly drawn by Marie Severin) and weaves his personal quest for these when they came out with the sketchy history of the company that made them. Also of value in this seventh book is that each of these mini comics is presented actual size as a two-page spread.

That may seem redundant, since each mini-comic is also printed much larger as one of the other six books in this small slipcover edition, but the truth is, they actually read better at the tinier size.

Each of the seven books measures about four by six inches, and each small hardcover fits into a slipcover that is nicely decorated with the gumball machine insert graphics for the mini comics.

Geoff Spear did an amazing job photographing and enlarging the printed mini comics, but as small as these books are, it looks like they’re actually presented here larger than the size they were originally drawn.

These are cute and quaint and scratch the itch for collectors who have wanted to see them for more than fifty years, but they’re also a pretty cool gift for new fans of the Marvel Universe who are curious about the early days of Marvel’s merchandising. The “comics” are mostly one-panel drawings facing a page of text, but they’re a pretty cool example of forced minimalism in comics.

You might be able to order Marvel Comics Mini-Books Collectible Boxed Set: A History and Facsimiles of Marvels Smallest Comic Books from any bookseller using the ISBN code, or, since it came out over two years ago, you can snap it up from Amazon for almost half the original price.  It’s a great gift for any longtime Marvel Comics fan.

And that wraps up The 2022 PopCult Gift Guide for this week. We have one more week to go, that’s a mere 25 more suggestions, so don’t forget to check back here Monday, but also, don’t forget our regular weekend features here at PopCult.