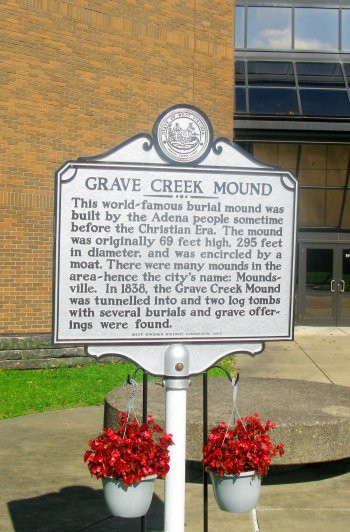 Saturday, if you’re not doing any of the many things I told you about yesterday, you could take a leisurely day trip to Moundsville, West Virginia for Fossil Day!

Fossil Day, a family-oriented program held twice a year, will return to the Grave Creek Mound Archelogical Complex on Saturday, Sept. 17, from noon to 4 PM. The Mound is directly across the street from the famous West Virginia Penitentiary, which will also be open if you want to visit it Saturday, too.

Dr. McDowell will identify fossils from noon to 2 p.m. and 3 to 4 p.m. At 2 p.m., Ray Garton, curator of Prehistoric Planet, will present a program titled “Fossils of West Virginia: What You Didn’t Know.” Pittsburgh’s Carnegie Museum of Natural History (CMNH) and Mr. Taylor McCoy, a vertebrate paleontology volunteer at the museum, are joining Fossil Day this year.

Friday afternoon The AIR’s showcase of classic Disco music presents ventures into the 1980s when the folks holding down the Disco fort were a Dutch novelty band that never gave up on the Disco sound, even when they were putting together medleys of Beatles songs, or bizarre collections of songs that blend the theme from Star Wars with Ennio Morricone, The Who’s Tommy, Jeff Wayne’s War of the Worlds and Carl Douglas’ “Kung Fu Fighting.”

Disco might have ducked in the alley and out of the mainstream, but one group of artists kept the radio hopping with slick production, chorus vocals like the Bee Gees and the requisite 120 beats per minute.  Stars on 45 was led by a former member of Golden Earring and featured vocalists who could mimic everyone from The Beatles to Donna Summer. The “Stars On” group took hit songs by The Beatles and other pop groups, and strung them all together with a strong Disco beat. And they managed to top the charts all over the world at a time when the anti-Disco backlash was stronger than ever.

For one hour you can go back and hear this Disco-fied artifact of 1980s excess. Just check this odd playlist…

You can hear MIRRORBALL every Friday at 2 PM, with replays Saturday at  9 PM (kicking off a mini-marathon), Sunday at 11 PM, Monday at 9 AM, and Tuesday at 1 PM  exclusively on The AIR.

That is this week’s PopCulteer. Check PopCult for all our regular features, with fresh content every day.