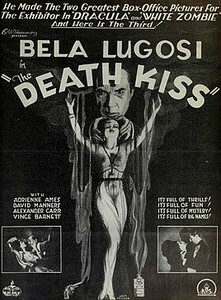 A few years ago on the late, lamented (RIP Rhonda) Roku Channel, Bizarre TV, I discovered a couple of horror movie hosts operating out of Cleveland, The Mummy and The Monkey. Featuring Janet Decay, Cleveland’s First horror hostess and Grimm Gorri, Cleveland’s Late Night Missing Link, the duo are the hosts of The Mummy And The Monkey’s Hairy Scary Hangout.

The Mummy And The Monkey have been part of Cleveland Ohio’s horror movie scene since 2014. They host cheesy movies on their Channel on most Friday nights at 9:45 PM (Eastern Time) and you can watch on YouTube or their Facebook Page.  Past episodes are archived, so you can catch up whenever you want. They follow the usual format of the classic horror movie host (think Svengoolie or Elvira) but they put their own spin on it and make it loads of fun to watch.  They even have their own merch and also maintain a cool eBay store, stocked with wild vintage items.

Above you see their latest show, featuring The Death Kiss, a pre-code mystery movie starring none other than Bela Lugosi and a couple of his Dracula co-stars from the year before!