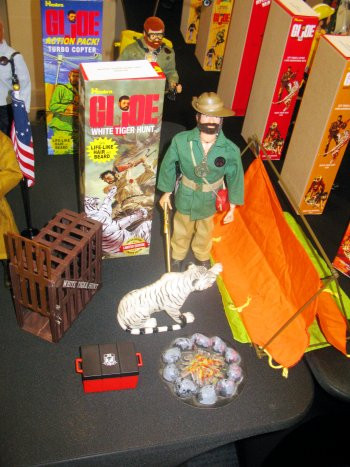 Your PopCulteer has been back from this year’s Kentuckiana GI Joe & Toy Expo for a few days now, but this is the first chance I’ve had to bring you photos. Because of ongoing technical issues, we’re limited to ten pictures per photo essay here in PopCult, so you can expect several more photo essays over the next week or so, and hopefully a video by Sunday. As you can see by the custom re-packaging of a vintage set to the right, there was a lot of great vintage GI Joe stuff for sale.

We had a great time. The convention set and add-on were spectacular, plus we got to see the prototypes of the new Super Joe Unlimited figures. Sadly, a different technical glitch (a bad SD Card this time) wiped out the last twenty photos I took, which included close-ups of those prototypes, but they will still get their own photo essay after I pull images from the video we shot.

It was nice to catch up with old friends and spend way too much money on cool toys, and we’re seriously considering going to the winter show in January, just so we can check out the new location as Kentuckiana moves to a dedicated convention center, having grown too large for the hotel conference rooms that have been its home since the beginning.

For now, this is just a taste of what we saw. PopCult will have several more 2022 Kentuckianua GI Joe & Toy Expo photos in the coming days.

Check back in the coming days for more pics and video from Kentuckiana 2022.