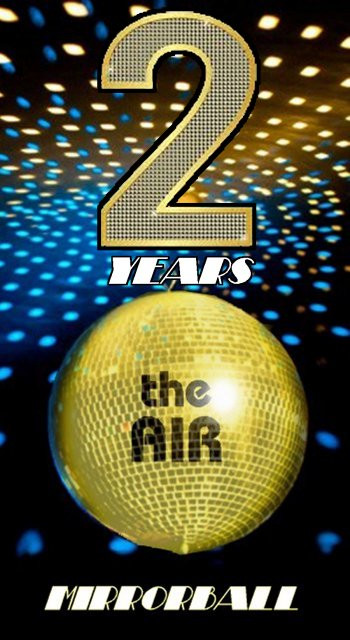 We’ve hit a bit of an unexpected milestone, so this weekend we’re bringing you more than two days of a marathon of The AIR’s Disco showcase, MIRRORBALL, hosted by Mel Larch.

Friday evening we kick off 51 hours of MIRRORBALL in a marathon that begins and ends with this week’s new show.  You can hear these shows on The AIR website, or just click on the embedded player right here…

Friday afternoon we offer up eminently danceable music with an brand-new fiftieth edition of MIRRORBALL and then we run an encore episode of Sydney’s Big Electric Cat. The AIR is PopCult’s sister radio station.

May 1 marks two full year since MIRRORBALL, Mel Larch’s Disco Mixtape program debuted on The AIR as a one-off music special, and became such a runaway hit that we decided to put it on our weekly schedule full-time.

It was during the late summer of 2019 when Mr. and Mrs. PopCulteer were careenig through Eastern Pennsylvania, listening to The Rialto Report podcast about Andrea True, when Mel remarked on how much she loved classic Disco music, and we began to talk about doing a Disco show for The AIR. The show didn’t happen until the pandemic shut everything down and gave us more free time, and the first MIRRORBALL debuted as an AIR Music Special on May 1, 2020.

Two years later and Mel still manages to do a fresh episode of the show almost every other week. For the second anniversary of MIRRORBALL, which quickly became one of the most-listened-to shows on The AIR,  we are going to run 51 hours of MIRRORBALL beginning April 28 at 9 PM (that’s Friday night if you’re keeping track at home). We will play every episode (except for holiday specials) and we will begin and end with Mel’s big 50th episode, which debuts Friday at 2 PM.

To mark 50 episodes of MIRRORBALL, Mel put together an hour of some of her absolute favorites from the Disco era. Tune in at 2 PM Friday, and check out this playlist…

You can hear MIRRORBALL every Friday at 2 PM, with replays most weeks Saturday at  9 PM (kicking off a mini-marathon), Sunday at 11 PM, Monday at 9 AM, and Tuesday at 1 PM  exclusively on The AIR.

This week, of course, you can tune in at 9 PM Friday night and dance your pants off the whole weekend, until Midnight, Sunday, when Mel wraps up just in time for the usual overnight Sunday/Monday marathon of The Swing Shift.

That’s not all we have planned for MIRRORBALL, as we have something very special lined up for an episode coming your way in a couple of months.

In fact, your humble blogger is on his way to an undisclosed location to work on that as you’re probably reading this. If your curiosity is piqued, just be patient and keep reading PopCult. All will be revealed when the timing is perfect.

That’s our PopCulteer and it’s also what’s on The AIR this weekend. Check back because we have a fresh post every day.