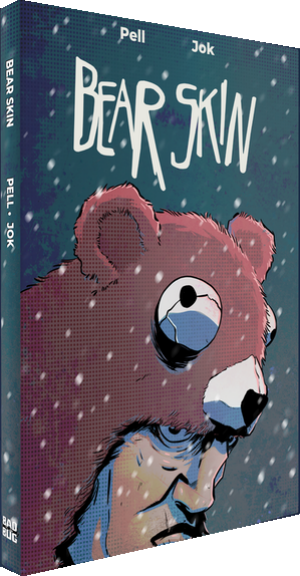 We have two cool Kickstarter projects to tell you about today. Both are from proven creators that we’ve plugged here in the past. So let’s just jump in, because these are really nifty things, indeed.

First up we have a new graphic novel from local boy made good, Jason Pell.  I’ve been a fan of Jason’s for some time, and I’ve told you about his Pinpricks illustrated books and graphic novel, all of which easily met their goals and were funded and delivered promptly.

This time Jason is handling the writing, while the art is provided by Jok, and the story, Bear Skin, is about a small West Virginia town that gets wiped out by a serial killer. Is the man in the bear suit the killer, or is he defending the town from other monsters?  Check out this cool preview video…

With a local creator, localish setting and a murderous guy in a bear suit, how can you go wrong?

You can find out how to support Bear Skin and get this intriguing graphic novel in your hands in time for Halloween at this link. 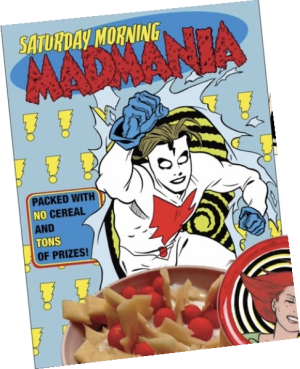 Next up, we have another giant grab-bag of Madman goodies courtesy of Christopher Irving and The Drawn Word.

Last year I told you about the Madman Ginchy Glider and the Madman Activity Book, all based on Mike Allred’s beloved offbeat Superhero, and now we have Mike Allred’s Madmania Saturday Morning Cereal Box Fun Pack!

Check out this message from Christopher…

This is the dream of every kid my age. It’s a big cereal box with NO CEREAL. It’s filled with “toy surprises inside” instead.  As they say, “Get the Madmania cereal box with NOTHING but prizes inside, including yo-yos, a sticker, postcards, and more!”

This campaign is already fully-funded, and every time a stretch goal is met, another cool item gets added to the Cereal box. As I write this, the box will contain four yo-yos emblazoned with Madman characters, one whoopie cushion, and two lobby cards. The next stretch goal will see the addition of one more lobby card and TWO POGS! With three weeks to go and more people kicking in every day, this may be one of the most impressive fake cereal boxes filled with toy surprises ever Kick-started.

Follow this link to go to the Kickstarter page for this way-cool, fun-filled project.

There are three or four weeks left in these campaigns, but don’t sleep on them. You don’t want to miss out on the rampant coolness.