On this, the penultimate day of The 2021 PopCult Gift Guide, we once more venture into the random pile of great gift ideas, as we bust out the word “penultimate” because it sounds fancier than “next to last.”  Our gift suggestions range from bittersweet to overlooked, and cool toys from military action figures to battery-operated HO Scale trains, plus there’s a leftover gag gift from Turkey Day in the mix as well.

Putting It Together: How Stephen Sondheim and I Created “Sunday in the Park with George” 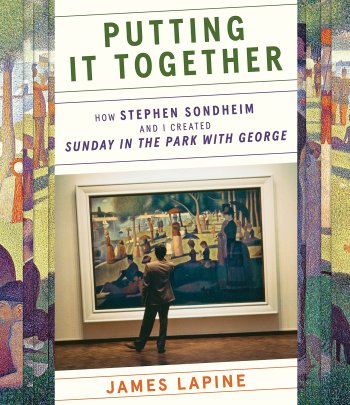 I have to be honest, I almost didn’t put this book on the list. I changed my mind because a lot of Stephen Sondheim fans will want a gift like this to remember the legendary Broadway composer that we lost a few days ago.

By all accounts this is a spectacular book, a fascinating insight into the creation of one of the most memorable musicals of the 1980s. My misgivings were because of the large number of complaints about poor printing and reproduction in the first printing. Every review of the digitial edition has been overwhelmingly positive, but word is that the print edition leaves a lot to be desired.

Still, this is an important book about an important work of theatre, written by Sondheim’s collaborator, James Lapine. Let’s go to the publisher’s blurb…

Putting It Together chronicles the two-year odyssey of creating the iconic Broadway musical Sunday in the Park with George. In 1982, James Lapine, at the beginning of his career as a playwright and director, met Stephen Sondheim, nineteen years his senior and already a legendary Broadway composer and lyricist. Shortly thereafter, the two decided to write a musical inspired by Georges Seurat’s nineteenth-century painting A Sunday Afternoon on the Island of La Grande Jatte.

Through conversations between Lapine and Sondheim, as well as most of the production team, and with a treasure trove of personal photographs, sketches, script notes, and sheet music, the two Broadway icons lift the curtain on their beloved musical. Putting It Together is a deeply personal remembrance of their collaboration and friend – ship and the highs and lows of that journey, one that resulted in the beloved Pulitzer Prize–winning classic.

This book is a no-brainer gift idea for any fan of Sondheim or musical theatre. Just be mindful of the complaints about the printing and paper quality. Available everywhere books are sold. 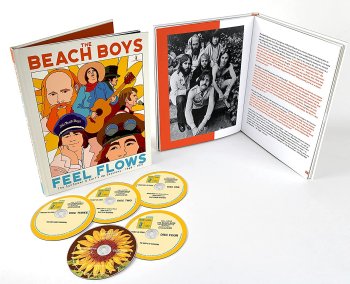 by The Beach Boys

This is a hefty deep dive into underexplored Beach Boys waters, and it’ll make the perfect gift for the die-hard Beach Boys fan on your shopping list, or for anybody who loves great pop-rock music with luscious harmonies and killer hooks.

The “Feel Flows” collection from the Beach Boys is based on the landmark albums, Sunflower and Surf’s Up, released in 1970 and 1971, respectively.

This is a 50th anniversary, expansive 5CD and digital box set officially titled Feel Flows – The Sunflower and Surf’s Up Sessions 1969-1971 that chronicles and explores in depth the metamorphic and highly influential 1969-1971 period of the band’s legendary career.

Assembled by Mark Linett and Alan Boyd, the team behind the award-winning SMiLE Sessions, this collection features newly remastered versions of Sunflower and Surf’s Up and boasts a total of 135 tracks, including 108 previously unreleased tracks, live recordings, radio promos, alternate versions, alternate mixes, isolated backing tracks and a cappella versions, culled from the album sessions.

Feel Flows shows how creative The Beach Boys continued to be after their commercial peak, and after the breakdown of Brian Wilson, as the other members of the band stepped up and started contributing some amazing music.

Available where music boxed sets are sold, or at Amazon. 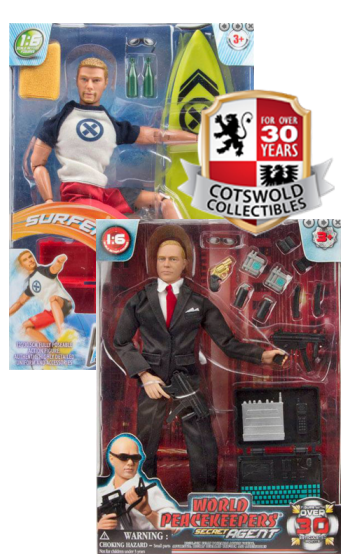 These cool action figures used to be holiday mainstays at Big Lots, but a few years ago the discount retailer dropped them in favor of some really sucky figures with hardly any articulation. Now Cotswold Collectibles has stepped up and you can once again get cool World Peacekeepers action figures, vehicles and accessories in 1/6 and 1/18 scales.

Best of all, while Big Lots only carried a handful of regular military figures, Cotswold is offering much more variety, with 12″ figures of Astronauts, Extreme Sports, Secret Agents and Ninjas. They also have 1/6 scale Humvees, Jeeps, horses, and tons of other cool accessories and sets.

Fans of 1/18 scale figures will find cool stuff like airplanes, helicopters, tanks and a military base, complete with a Quonset Hut.

Cotswold is a reliable online retailer with a 30-plus year track record of serving the hobby, and these toys make the perfect gift for any kid or adult who’s neck-deep into action figures. Cotswold has a ton of other cool products for the hobby, too, from Superheroes to customizing supplies, and their own line of cool 1/6 action figures and sets. 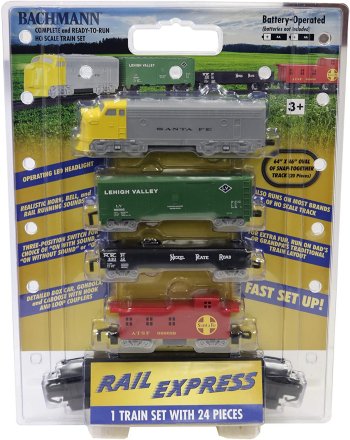 This is a great beginner’s train set. It’s perfectly HO scaled but it’s battery operated. The cars will run on regular HO Scale track (possibly with the addition of new couplers) and it’s around fifty bucks from most retailers (currently more than that at Amazon, but their price seems to change every hour or two).

Now little engineers aged 3 and older can enjoy all the sights and sounds of a real railroading adventure! The new battery-operated Bachmann Rail Express sound-equipped train set includes an oval of snap-together track for fast set-up. It features an F7A diesel engine with realistic horn, bell, and rail running sounds plus an operating headlight; three colorful, detailed cars and a 64 x 46″ oval of snap-together track. Just add two AA batteries (not included) and you are all set to go. No controller or power pack is needed. For extra fun, the Rail Express train can be run right on dad’s or grandpa’s traditional HO scale layout (if the power is off, that is).

An F7A locomotive with operating LED headlight, realistic horn, bell, and rail running sounds (three-position switch for choice of “on with sound,” “on without sound,” or “off.”
Cars include a colorful gondola, boxcar, and off-center cupola caboose with hook and loop couplers.

This is the perfect gift for the very young train enthusiast on your shopping list who may be creeped out by the fact that all the Thomas The Tank Engine trains have faces on them. 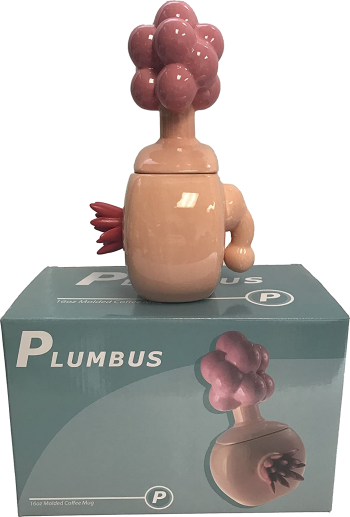 Finally we have the Turkey Day gift that I forgot about last week in our gag gift post.

Fans of Rick & Morty will be delighted at whatever the hell this monstrosity is supposed to be. It’s a coffee mug shaped like a Plumbus. “What the freaking hell is a Plumbus?” you ask?

Let’s got to the manufacturer’s PR…

Welcome to the exciting world of Plumbus ownership! A Plumbus will aid manythings in life, making life easier. With proper maintenance , handling , storage, and urging , Plumbus will provide you with a lifetime of better living and happiness. Plumbus is a fan favorite! What better way to show your love for Rick and Morty then with this Amazing Plumbus mug / stash jar! Display him on your desk or in your kitchen, either way…..this will be the ultimate conversation starter!

Wubba lubba dub dub! Everyone has a plumbus in their home. It’s hard to imagine life without one. And we all know how a regular old plumbus is made. You can get ’em by the case at the local big box store.That’s why we carry only artisan plumbuses. Rest assured that these are not your 6 1/2 brapple black-market plumbuses. We use extra-virgin schleem, never before pressed into the dinglepop, which is organic. And we do not force the dinglepop through the grumbo; it proceeds naturally on its own.

This ceramic mug / stash jar looks just like a Plumbus and comes with a ceramic lid to keep your favorite beverage warm and ready to drink. Also great to store your favorite stash of goodies. This is a must have for all Rick and Morty fans and would make the Ultimate Christmas or Birthday gift for that special friend in your life.

So there you go, it looks like a cross between a sex toy and a toilet brush, only this is one you can drink out of.

Give this as a gift at your own risk.