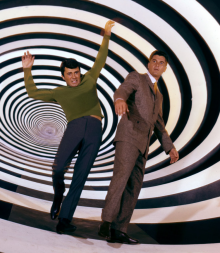 Above you see a short documentary about Irwin Allen’s “The Time Tunnel,” a 1960s science fiction TV show that I loved as a kid, but haven’t tried to watch since. It was only around for thirty episodes, which was one season back then. I hear that it hasn’t aged well.

If this gives you a feeling of Deja Vu, it might be because I’ve gone back in time seven years to recycle a Sunday Evening Video this week.  Between doctor’s appointments and The 2021 PopCult Gift Guide, it was easier to bring back this cool post for an encore than to come up with something new.

The show is most fondly remembered for having Lee Meriwether, the substitute Catwoman from the 1966 “Batman” movie, among its cast, along with James Darren, who went on to play the holographic crooner, Vic Fontaine in “Star Trek: Deep Space Nine.” It also has a pretty killer score and theme by John Williams.

The premise of “The Time Tunnel” was that government scientists built a portal that you could jump through to travel to different time periods. Keep in mind that this was more than twenty years before “Stargate,” “Quantum Leap” or “Wayne’s World 2.”

Below you see the original intro, and after the jump you’ll find a “lost’ intro (actually a remix with a goofy slide for the last minute) to the show and some strange video rarities and oddities from “The Time Tunnel.”

If you’re interested in seeing the show, it can be found on a few streaming sites, and on DVD boxed sets. From what I hear, part of the reason it doesn’t age well is because most episodes have pretty much the same plot. I prefer to remember it the way I saw it when I was four, rather than spoil the memory.