RFC 113 "Jazz From Hell Preview" from Rudy Panucci on Vimeo. 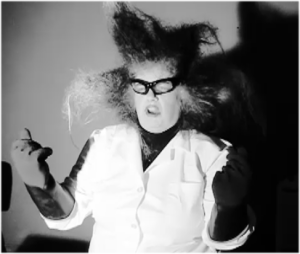 This week we depart our usual chronological trip through the Radio Free Charleston archives to go back eleven years to a pretty major departure from our usual format. Back in 2010, for some reason, I thought it would be good idea for the RFC Halloween special to make a whole cheesy horror movie, in black-and-white, and present it as an episode of the show.

I had the bright idea to make “Jazz From Hell,” named after a Frank Zappa album, this movie attempted to be a cross between “White Zombie,” “Dragnet,” and “Reefer Madness.”  It’s about a Mad Scientist who creates a mutant strain of marijuana that turns people who smoke it into zombie jazz musicians.

It wasn’t a bad idea. In fact, it was a really good idea. However, the execution fell a bit short. Basically I forgot the number one thing they teach you in film school…don’t start shooting without a script. I thought I could apply my usual guerilla filmmaking techniques to a narrative film, and, well, it’s eleven years later and the film remains about 60% unfinished.

However, I had enough footage on hand to slap together an extended trailer, which became our 2010 Halloween Special.  It’s about 13 minutes of the movie, plus a promo spot for HallowEast by KD Lett. This was during the period that I was uploading Radio Free Charleston to Vimeo instead of YouTube, so when I compiled a YouTube playlist of all our Halloween shows, this one got left out. You will see the rest of the RFC Halloween shows next week. For now you get to see its of the unfinished goofball horror epic, “Jazz From Hell,” starring yours truly, with Melanie Larch, Chelsea Cook, Lee Harrah, Craig Auge, Duncan Stokes, Donnie Smith, Abby Rhodes and Steven Allen Adams.

You can read the original production notes HERE.

And you can see an additional short trailer right here…