I’m going to kick off PopCult’s RANT WEEK with the big one–the Charleston Riverfront Development plan, and a few things that need to be pointed out about it. 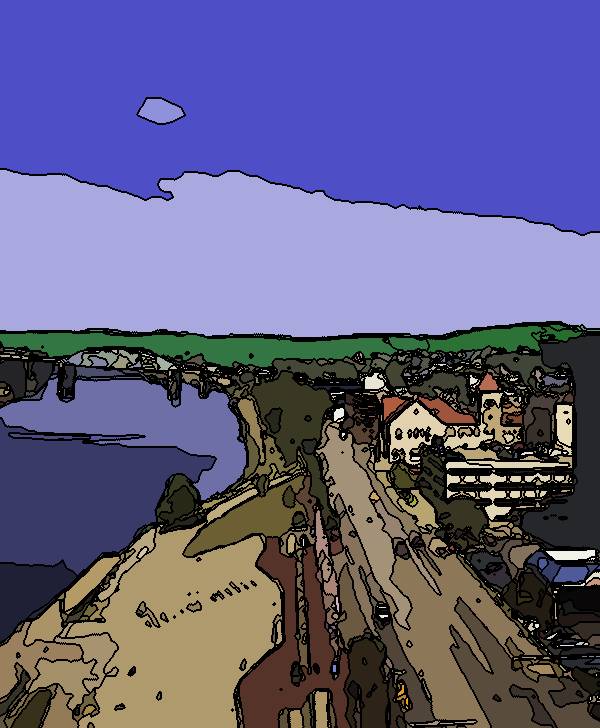 The recent burst of irrational exuberance over the proposed riverfront redevelopment plan put forth by Sasaki Associates seems a bit familiar to me. It reminds me of the classic episode of The Simpsons, where a slick out-of-towner convinces the citizens of Springfield that, in order to revitalize their city, they need a Monorail. I find it hard to believe that, in a city where a “user fee” had to be imposed to meet the basic needs of the police department and do street repair, people can seriously consider pouring millions of dollars into enhancing the riverbank. This riverbank is a place that the people of Charleston have spent decades demonstrating that they are not willing to even cross the street to visit.

This is NOT because the street is too wide. It’s because riverbanks aren’t necessarily nice places to pass the time. You see, they tend to slope sharply, ending up in the water. Flat ground is usually one prerequisite for a pleasant recreational area and the riverbank doesn’t have much of that. In addition, the river is not exactly such a wonderful place. For much of the year, the Kanawha’s appearance and odor can best be summed up using scatalogical terminology.

Riverfront parks are great for people who love the water. That might just be as much as ten percent of the population. Can Charleston really afford to spend millions of dollars so that, on maybe four or five quiet evenings each year, a handul of people will say, “Gee, this is nice”? The whole idea of a Green Ribbon sounds nice, until you realize just how few Charlestonians will actually use it. Is it going to be worth the cost? The quality of life in Charleston could be raised higher if the city would spend some money to lure a large grocery store to the East End. I can’t quite grasp the cost-versus-benefit of the riverfront plan.

I also can’t understand all the complaints about the mere existence of Kanawha Boulevard. It’s one of the rare city projects that made sense and worked. I lean towards siding with the group that wants to declare it an historical structure. It is a modern wonder and it does its job very well. I’ve heard complaints that it never seems congested. That because it works! Perhaps, between Leon Sullivan Way and Greenbriar Street, it could be safely cut down to three lanes, but any plan to reduce it more than that seems absurd on its face. I’m old enough to remember what it was like before the interstate was built, and I can’t understand why reducing the Boulevard to two lanes is even being seriously considered.

There has been a very sensible proposal that, just to test out the current relevance of the

Boulevard, temporary barriers be erected to reduce it to two lanes, to see if that idea is feasible. This should be done during the upcoming Legislative Session. If it doesn’t hurt the traffic flow, then, and only then, should reducing the size of the Boulevard be considered. For some reason, this very, very logical idea has gained no traction with the city planners. I can’t understand why. Everyone involved with this project admits that it will take years, possibly decades, to bring it to fruition. Why rush into the most drastic part of the plan without patiently going to the effort to test the basic premise–that Kanawha Boulevard is unnecessary, and that the citizens of Charleston are going to flock to the riverfront and make it the coolest place on Earth and a viable revenue stream for the city.

There are several other parts of the proposal that strike me as sillier than normal. The scenic overlook that would allow visitors to gaze at the beautiful Tank Farm on the opposite side of the river comes to mind. And the idea of installing fountains on Magic Island, which is prone to frequent flooding, seems misguided. Boat docks (call them “marinas” if you must), no matter how they’re designed, are among the ugliest man-made structures on the planet–if they add them, they should be hidden under the Southside Bridge.

The most delusional idea is that of turning the Union Building into condominiums. It would take so much money to bring that building up to residential code, that the units would wind up being priced out of any sane person’s range. On top of that, they want to eliminate the parking for the Union Building, and there’s no grocery store handy downtown. The building sways in heavy winds and you hear tugboats going by all the time. Who’s going to want to live like that? That idea is a pipe dream of major proportions. There isn’t even that much demand for downtown condos. The ones that we have now are a hard sell.

Just so I don’t come across as totally negative, I have a few suggestions, which I might humbly offer up as being a million times better than the plan currently in place. And I’m not charging six figures for these, either.

First, take that large parcel of land where the Elk River/Town Center Hotel once stood. Dig up the concrete. Plant grass. Build a stage and band shell facing East, but close enough to the southwest corner of the lot so that it can be seen from the Boulevard. This is the new Haddad Riverfront park. It’s a big, gorgeous, green space where all the nice peoples can go recreate without falling into the river.

The old Haddad Riverfront park should be history. Take the Eastbound lanes of Kanawha Boulevard and move them to the other side of the Union Building. Then they can rejoin the original path of the road as soon as possible. This may mean joining up on either side of the South Side Bridge, but it would be worth doing. You’ve solved the problem of access to the Union Building, and gotten rid of that white elephant of a riverfront “park.”

There will be a triangle of land created by this road diversion. That’s where you build the City Of Charleston Welcome Center. A distinctive building with a decent-sized parking lot to help direct visitors around our city–who could disagree with that being a good thing?

Instead of killing Kanawha Boulevard to improve access to the riverbank, how about building a series of pedestrian walkways crossing over the street? They could be incorporated into sculpted arches and become a distinctive feature for the city. One of the archways could incorporate a rising sun motif, and take the name “The Sunrise Arch.” This one could stretch from the new Riverfront park to the actual riverbank, and maybe its riverside disembarking point could take the place of the scenic tank farm overlook.

Lastly, follow the recommendations of the Army Corps Of Engineers to fix the problems associated with erosion, and try to find a way to improve accessiblity to the riverbank at the same time. But do this without eating into the Boulevard or pumping tons of money into a developing an attraction that nobody will want to visit.

Oh, the idea about lining the Boulevard with trees….forget it. Trees look great in concept drawings, but in real life, they need expensive regular care and in the fall, they drop leaves everywhere and aren’t so pretty. There are other forms of greenery that won’t look like hell from the other side of the river for most of the year. I just drove down MacCorkle and glanced across the river to the downtown area, and to be honest, it looks pretty damned good. I can’t see the rush to fix what doesn’t appear to be broken. Minor repairs and regular upkeep might be a heck of a lot more affordable than a drastic overhaul.

I have one final request that sort of ties into tomorrow’s rant. Any new green space in Charleston should be SMOKE FREE! I’ve spent a lot of time downtown lately, and it’s disheartening that Davis Square and the Lee Street Triangle seem to exist primarily to act as giant ashtrays for the tobacco addicts. Tomorrow, we look at smoking.